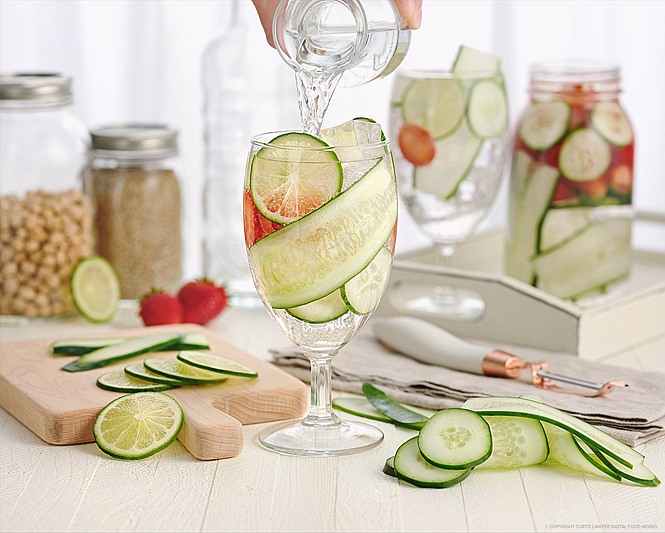 Is Detox Water still a trendsetting topic? It sure was not too long ago. The Cucumber Lime Strawberry combo is actually quite refreshing with sparkling water. I like the bigger bubbles in Perrier, which is what I was using here. Bigger bubbles photograph better too!
Over the course of my last Instagram experiment, I started to wonder if certain photos and posts had (or needed to have) any kind of value, beyond just being aesthetically pleasing.

Some of my favorite posts are these little square "texture" photos, shot from overhead. They really are neat looking little squares (so far, the photos have mostly been ground spices), but in addition to being cool looking … I also try to type in a little factoid about the texture that I took a photo of — and much to my delight, the amazing people that follow my account would read the text — and comment on the photo!

Every once in a while, (on some of the other posts) — I would add a lighting diagram as a secondary photo that showed where the lights were placed and what kind of flash modifiers I was using. Even before that, I was trying to link groups of three photos to full-blown articles on the Digital Food Works site about design or staging. Whew!!! Those are fun, but it's a lot of work keeping up with writing big articles for all the photos… after all — a picture is supposed to be worth a thousand words — not the other way around. 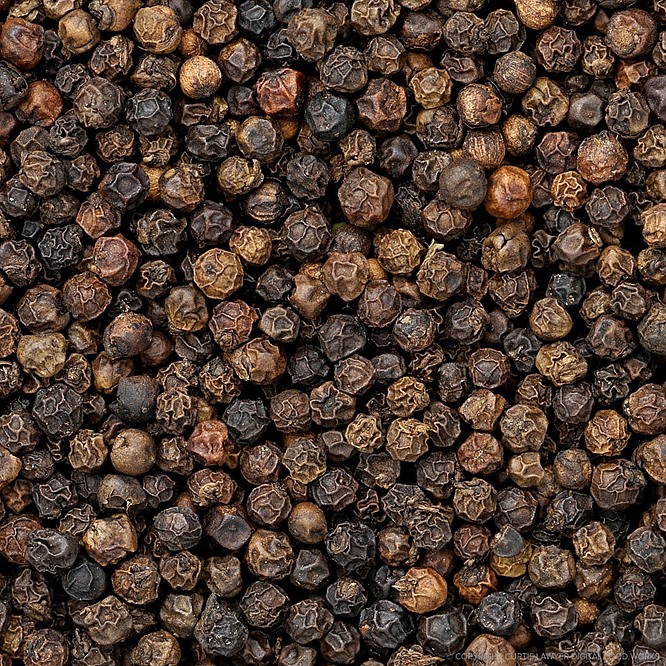 Some of the more content-rich Instagram posts (so far anyway) have been these texture squares, where I try to include a fact or two about the spice in the photo.
Now, there really isn't much statistical data (at the moment anyway) that would suggest those "content rich" photos did any better than just random photos. In fact, the eyebrow-raised cynic in me... says no — text-based content helps with interaction, but it's not "why" we follow the accounts, that we follow in the first place.

I myself follow a couple accounts that originate from different countries... and while there is a "translate" button... I rarely push it. I see the photo as an inspiration, I "like" the photo, maybe comment on it, and move on.

Now that I've really started digging into the captions, there are a few more accounts that I'm following — that are in my own language, but don't provide any information beyond stating what the subject of the photo is. "Lemon Poppy Seed Pancakes"... and that's it — but I still "like" the photo. I'm honestly not quite sure what to make of that.

The tricky part seems to be me, not really knowing "what" Digital Food Works is (which is a little strange, considering it's my own site). If I were a company that made Tequila, I would totally recommend going with a couple of "lifestyle" campaigns mixed in with product information, and even a cocktail recipe here and there.

The DFW site started out as a B2B photography portfolio… but… most photographers do one of those… so I've been trying to add a few "articles" — in addition to those photos on various gallery pages — there's a recipe application in development, and I even programmed in a "daily national food celebration calendar"!

I feel like I'm getting close to a place with the main site… to where the social media posts could touch on, and connect back with several different content pools on the site itself — even if that only happens by way of the small text block that goes along with each photo.

For this next experiment of 15-21 images, in addition to creating (and trying to stick to) a style guide for the Instagram feed, I wanted to see how (or "if") the photos I was uploading — lined up within a basic content guide structure. Not necessarily in a specific order or pattern, but just as a way to (maybe) help figure out if a photo with "value added content", would receive more likes and/or interactions — than a photo that was "just" aesthetically pleasing.

In order to do that, I need to be able to ask myself, "which category does this photo fall into" — and so I thought a category acronym was in order (I do like a good acronym)... 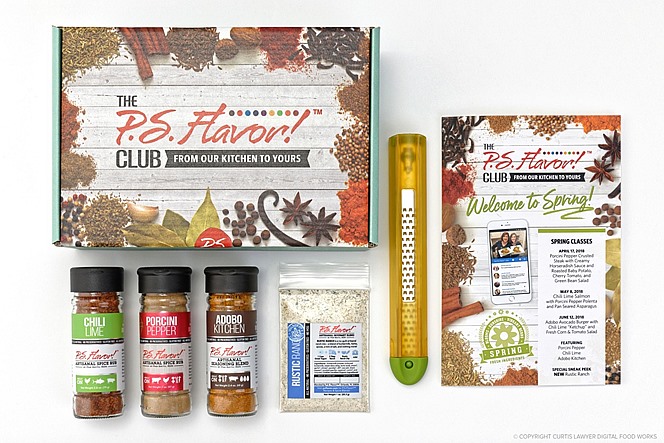 Design photos and posts could talk about some of the graphic elements from one of the packaging or marketing projects I've worked on.
Design — I could write a caption about some planned design aspect of whatever is in the photo... graphic design or packaging design — or even just something about colors or styles.

Recipe — Maybe someone would want to like or save the photo to act as a reminder, that the recipe to make the thing pictured in the photo, is located on the DFW site... or maybe even in the post itself.

Information — Some small non-design and non-photography information about the subject of the photo. My texture squares would fall into this category... show a close-up of some parsley (for example) and write about the health benefits or where it's grown or sourced from, etc.

Photography — Which might include information about staging, camera placement, a lighting diagram, or some quick note about how or why something was photographed a certain way.

Products (sponsored or otherwise) — Here's the "commercials" for most Instagram accounts... (there's probably going to be a whole new article on this topic in the future).

Inspiration — This is kind of my back up, catch-all category... where maybe I don't have to type much of anything. "Here's a picture of a Grilled Cheese Sandwich"... and let that be that. 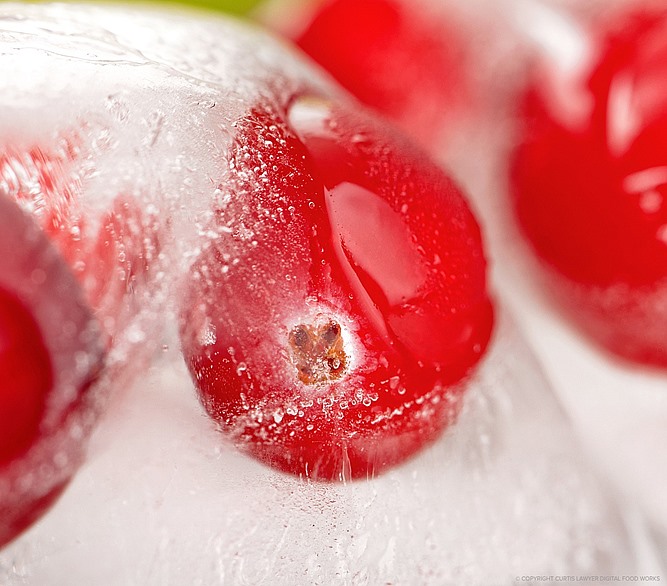 Something like this photo of a cranberry trapped in an ice cube, could be used in the Experimental or Enigma categories!
Experimental — There are so many little food and beverage "discovery tests" that I would like to try, and write about — but they don't really rise to the "recipe" level. Like, what is the difference between making oven roasted potatoes with olive oil -vs- coconut oil... and why? There's all kinds of opinions online of course, but things like that don't really sink in (for me anyway), until I run a little A -vs- B test and actually see what the difference is. No matter what the outcome... the pictures would be kind of neat... and could end up being like little post-it notes.

Enigmas — Occasionally... I'll have a cool pre-photo, photo, but have never really used those anywhere. I was thinking... maybe I could use one of those to "tease" the next photo or post with a "what's going on here" kind of photo. Sort of a lead-in photo, that might end up being a fun conversation starter.

Sooooo… our acronym for the content guide is (drum-roll please)… D.R.I.P.P.I.E.E. 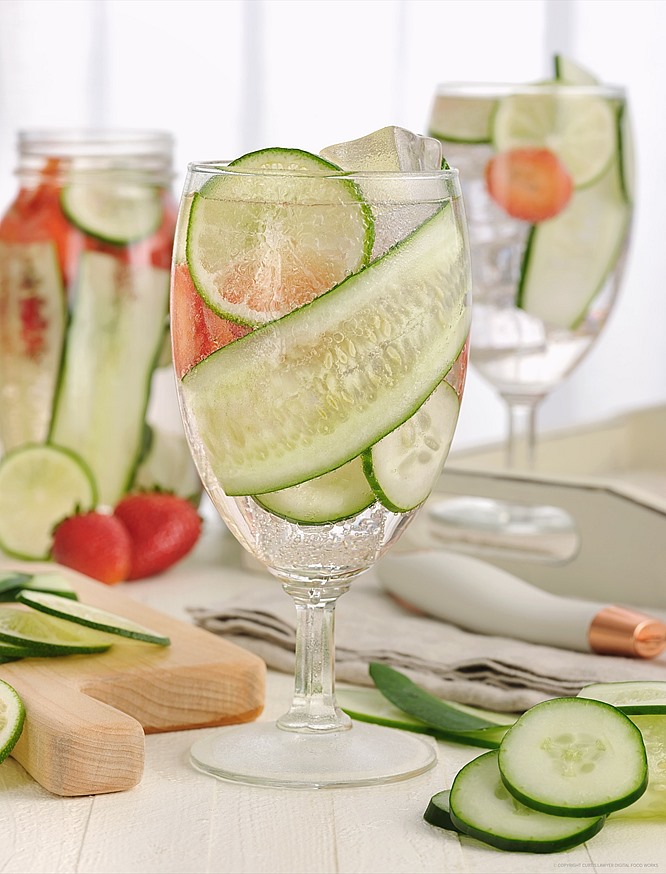 You have no idea how much everything in this photo wants to float to the top of the glass! :) Oh, those slices of cucumber and lime are packed in there pretty good. The strawberries were just about impossible to control. The Perrier bubbles attached to them like moths to a light bulb.
Hummmmm… I was hoping for something a little stronger than "Drippiee" … but we'll go with it!!!

For now — this is just a general way for me to ask myself… "does this photo I'm posting have some value added content". Categorize it, and then maybe once this next experiment is over... shed some light on a larger question — Does having a semi-focused stream of photos with some additional value added to them, make an Instagram account more follow worthy and/or interactive?

Just to put this out there… I haven't added any new content to the DFW Instagram account in over four weeks (prior to my post last week about the style guide)… so it's about as "normalized" as it's going to get. There are currently 375-ish followers and the last 21 posts have an average "like" count of 74 (a 19% like ratio). Much like all marketing, any results gleaned will be purely empirical, (because we're not posting the exact same photo day after day). Okay. Drippiee experiment on.
return to top of page
Article Index
all
Design and Branding
Food Photography
Product Photography
Site Notes
Social Media
Miscellaneous 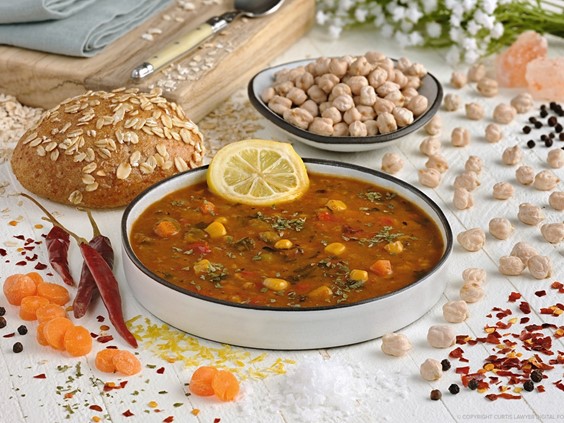 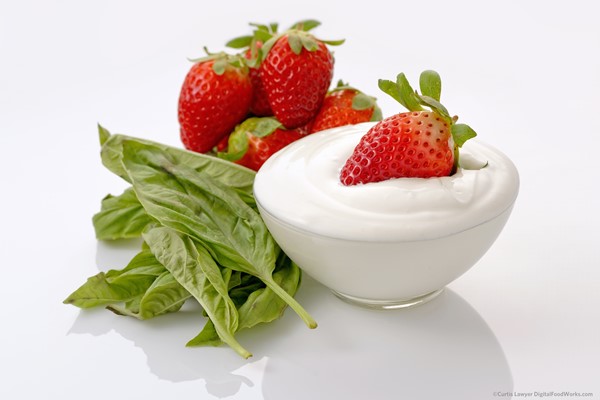