The Dark and Soupy Series 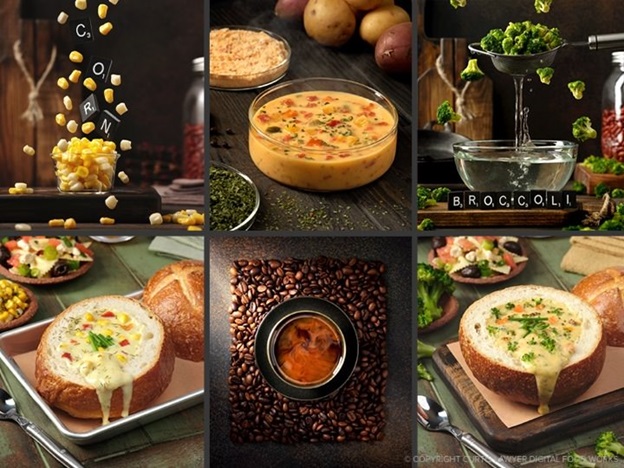 Well, I didn't manage to stick to a "one photo a week" schedule for this series either. I know this is true because when I started taking soup photos, it was cold outside — and now it's not — and soup photos seem completely out of season now.

I started posting this series on Instagram way back on December 13th, 2021… so seven months for 21 photos… I guess that's more like one photo every week and a half? I didn't stick to a regular timeline (again) though. I tried to do one a week, but had a couple of multi-week periods where I wasn't posting anything.

In that time, it seems like Instagram knocked down organic reach for photos… twice (again)… and seems to be favoring video more than still images. However — the number of new followers per new photo has remained about the same since 2020, and the average number of interactions per photo has actually increased by 2%.

I think that means that while organic reach for a video is higher that it is for a photo — it's far from zero, and photos still have a place on the platform.

My separator series this time was "baking chips", and the first three were traditional Milk Chocolate, Butterscotch, and Dark Chocolate.

I normally place some overhead abstract texture photos between the different photo series... pictured here are three different kinds of baking chips.
Because I was falling behind on my soup photos, I did a second line of "baking chips" — this time it's Mint Chips, White Chocolate Chips, and Lemon Chips.

These next three photos took the longest to set up and photograph. I started out with the idea of using scrabble letters in all three shots, to "spell out" the main subject of the photo — which is supposed to be the main ingredient in the three soups I would be making. I really quite like "Corn" and "Broccoli", but "Potato" was a bit problematic.

My potato photo concept was to show a potato growing underground with the scrabble letters in the dirt… but my execution of that photo was sooooo off, that I pulled the plug on that idea and just went with "boiling potatoes" instead.

The three "action shots" for this series are Corn, Potatoes, and Broccoli.
I did try to get the scrabble letters in the water with the potatoes — but that turned out to be a pretty bad idea as well. Needless to say, I wasn't really enthusiastic about the final photo — but it ended up being the fourth most liked photo of the entire 21 photo series. What do I know?

Moving right along — I wanted to separate my "soup" photos with something that wasn't soup. It was "fall" when I was thinking about all of this so "baked apple things" seemed like a good subject.

I usually put three beverage photos in each collection but since soup was a liquid I went with something a little different this time, themed around coffee.

Normally, I put in some beverage photos in each series, but because soup is also a liquid — I decided to go a different route, and show some coffee concept shots.

Finally, some soup photos from the soup series! The concept was, that I would be developing soup from various dried ingredients (i.e. powdered soup, aka "just add water", etc.). So the first three photos included the "wet soup" along with some of the dried ingredients.

Ahhhh... some soup! After I shot this group and looked at them on a big monitor... I wasn't sure I really liked the gray surface with that particular cup. Plus, it was a little hard to tell what was "in" the soup.
I really like these little glass bowls… but maybe not so much in this setting, and the gray surface I chose was really making things look much better. So I did a second group of these in some different shallow dishes that let the soup spread out some more.

The final group of photos was the three different kinds of soup in bread bowls, placed in something more like a restaurant style set up — plated with some additional side salads and spoons — much like you would see on a restaurant menu or website.

The main "final" shots this time were the "Soup in Bread Bowls" photos. The "drip" seemed to be an important element here. It definitely helps define that there's an ample amount of soup in each bread bowl.
My poor broccoli soup has the distinction of getting the least number of likes in the series. Maybe broccoli soup is not well liked… maybe people just got tired of seeing (basically) the same "soup in a bread bowl" photo three times in a row, or maybe Instagram has taken another step toward favoring videos over photos. It's hard to say for sure. I guess we'll see if that last one is true, once I start posting photo for the next series.

As it turns out, only one soup photo from the "Dark and Soupy Series" made it to the "top four" list. Two more were "Apple Baked Goods" photo and one boiling potato. Very interesting indeed. 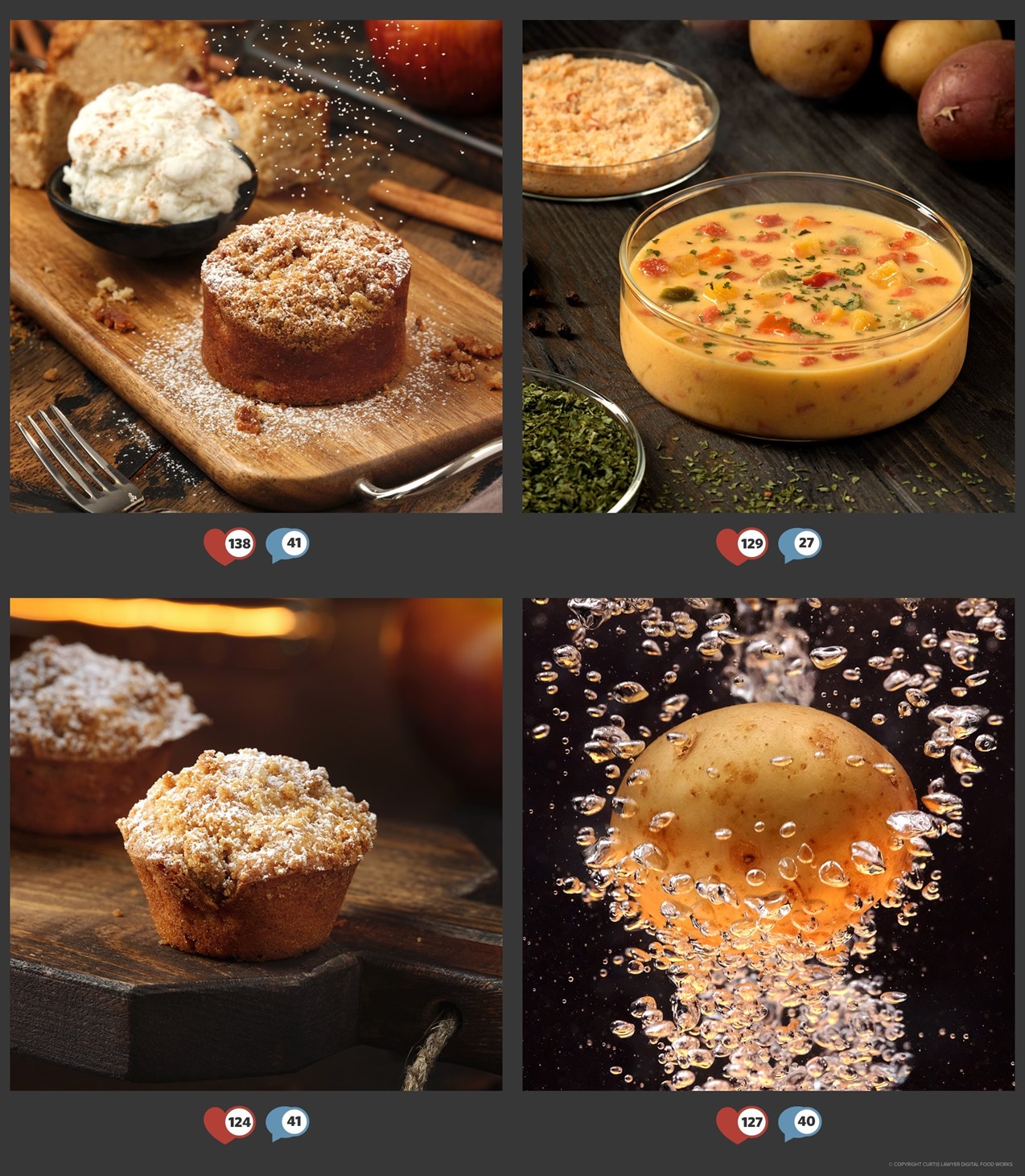 The top four "most liked" shots of this series were the "Hard Cider Apple Cake with Ice Cream and Powdered Sugar", "Potato and Cheddar Powdered Soup in a Shallow Dish", "Mini Apple Cake Bites with Cinnamon Crunch Topping", and "Boiling Potato".
I think the first apple photo really works because there's frozen motion in it (falling powdered sugar) and there's ice cream in the background. That warm apple cake, ice cream, sugar and cinnamon combo is a powerful memory trigger. I think maybe that's why it got the most likes. But then… why the boiling potato???

At the end of the day, these were all super fun to shoot and I've had a great time interacting with everyone that wrote comments — and that's what really matters.

Next up, I'm switching back over to a lighter, brighter set up — that I've been looking forward to for a while… but I haven't actually started shooting yet. I hope they turn out as good as what's in my head.

This group of 21 images resulted in a 8% increase in followers over the course of about 212 days.

The average photo "like to follower interaction ratio" was around 14.1% (total number of followers at period close, divided by the average number of likes per photo). That's actually up 2% from the previous "The Year of Spring Photo Series".
return to top of page
Article Index
all
Design and Branding
Food Photography
Product Photography
Site Notes
Social Media
Miscellaneous 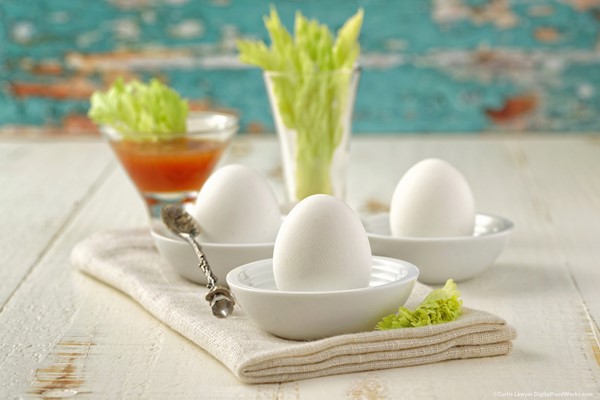 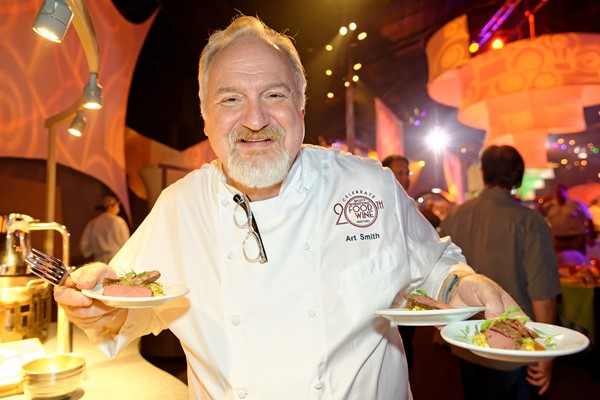